Apple Recipes Perfect for the Fall

As promised, here is the 2nd round of apple recipes we tried after apple picking.  If you missed my first batch of apple recipes, be sure to check it out!  Lots of tasty meals to try!

The first recipe we tried this time was Momma Pritchett’s Grilled Pork Chops and Apple-Pear Topping.  If you eat pork, you must try this recipe.  The pork chops turned out so juicy and tender, and the marinade added delicious flavor.  Based on reviews, we didn’t change anything except the serving size (we reduced the recipe to 4 servings). 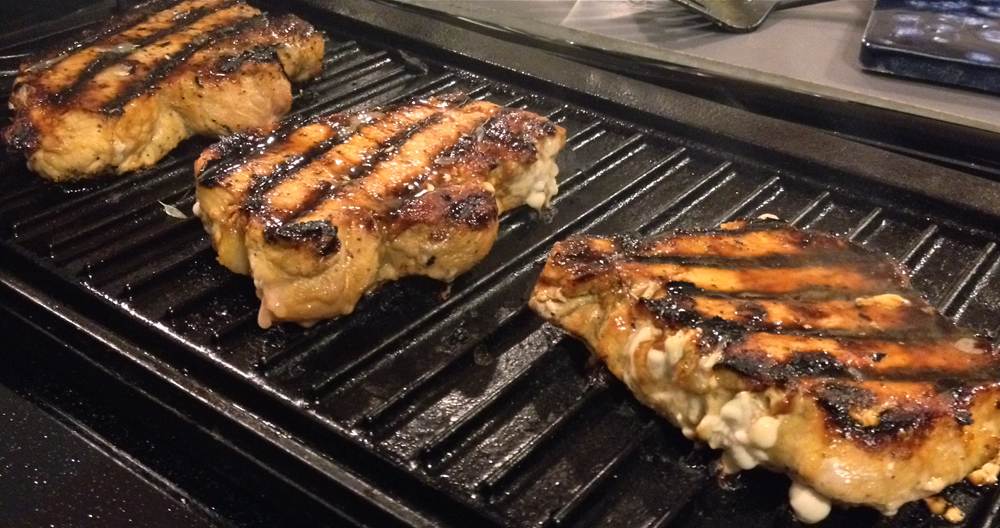 For the apples and pears, I did not bring the sugar mixture to a boil as suggested.  I simply whisked the sugar until it dissolved, and then added the fruit to the pan.  We also placed the fruit directly on the grill rather than use a grill basket. 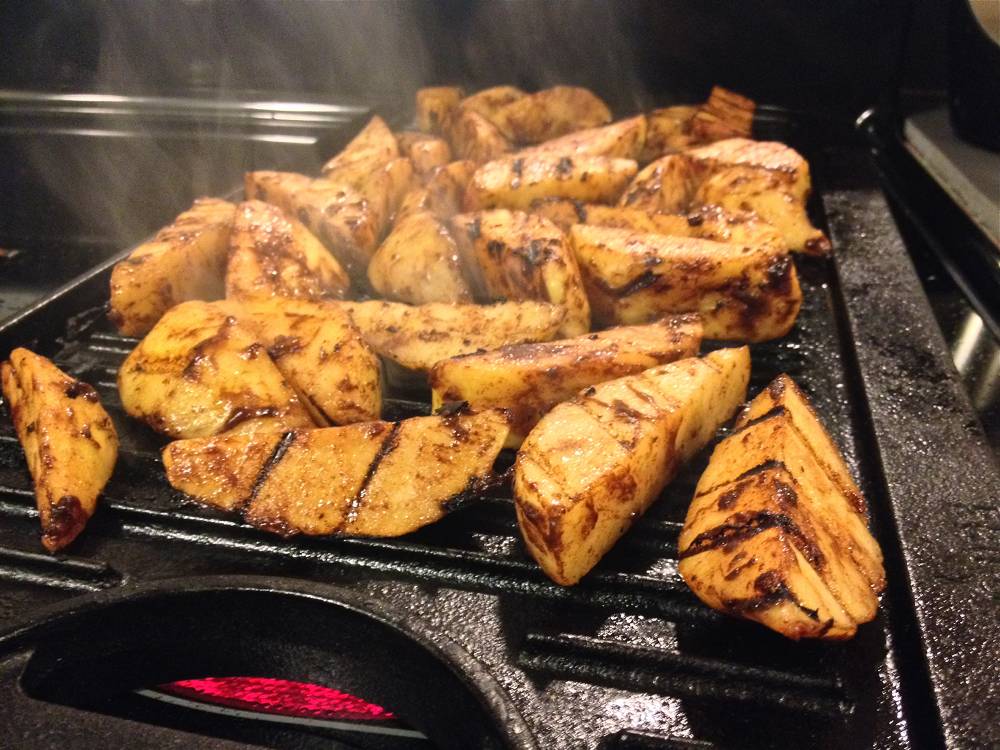 We don’t have an outdoor grill, so we just used our grill pan.  As you can see from the photos, both the pork chops and the fruit turned out picture perfect.  If you’re in the market for a grill pan, this is the one we have.  We are more than satisfied with it, and I highly recommend it! 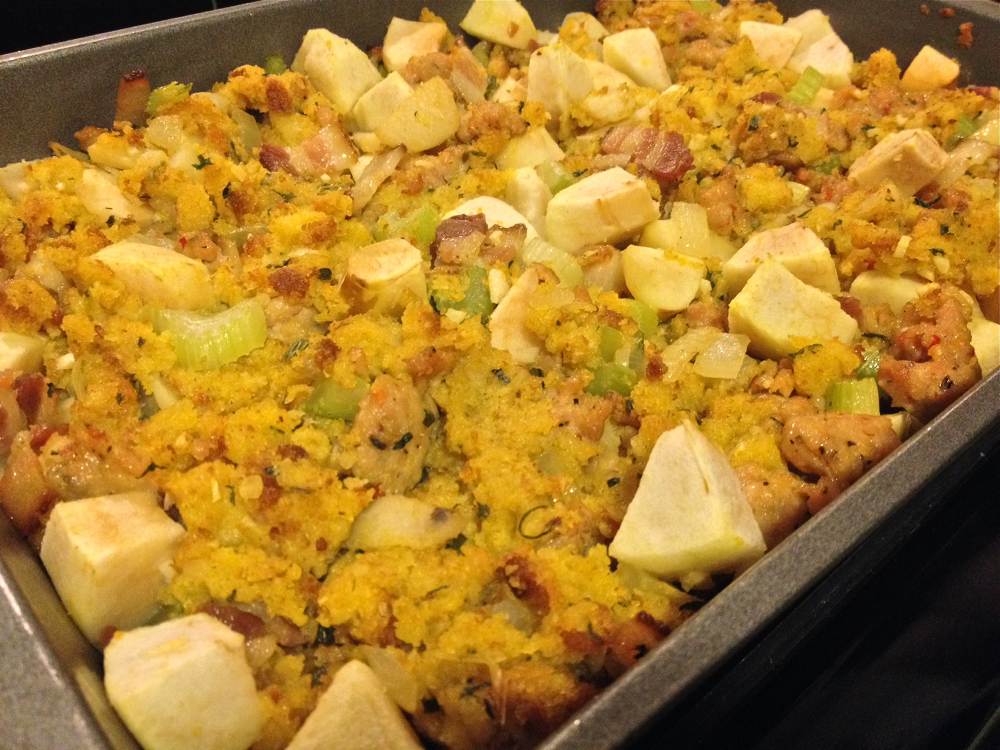 We paired our entree with a Sausage and Apple Stuffing.  If you recall from my first apple recipe post, I used apple smoked bacon in a turkey dish.  I also used chicken breakfast sausage in our Apple and Sausage Penne recipe.

Well, we used the rest of those ingredients in this stuffing recipe!  What was great about the recipes we decided on was that a lot of them used the same ingredients, so we really got the most bang for our buck!

The recipe did not call for bacon, but other recipes we saw did, so we decided why not add it in!  I mean, who doesn’t love bacon?  I diced the bacon and cooked it with the sausage.  We used a cornbread stuffing mix, and we used water instead of chicken broth since the recipe only called for 1 tbsp.

The stuffing turned out really well and paired beautifully with the pork chops.  We chose this recipe specifically because it was quicker than most.  I must say, even though we used a stuffing mix, there were so many fresh ingredients added in that it didn’t taste like a mix AT ALL.  This would definitely be an easy and fast stuffing for Thanksgiving, not to mention impressive!  And no one needs to know it was semi-homemade… If you make it for a large group, I suggest doubling or tripling the recipe.  Maybe we just like heaping helpings, but this didn’t last 12 servings, probably only 5-6 between the two of us.

The entire meal was SO good, and a lot quicker to make than we thought it would be.  I would highly suggest trying these recipes out! 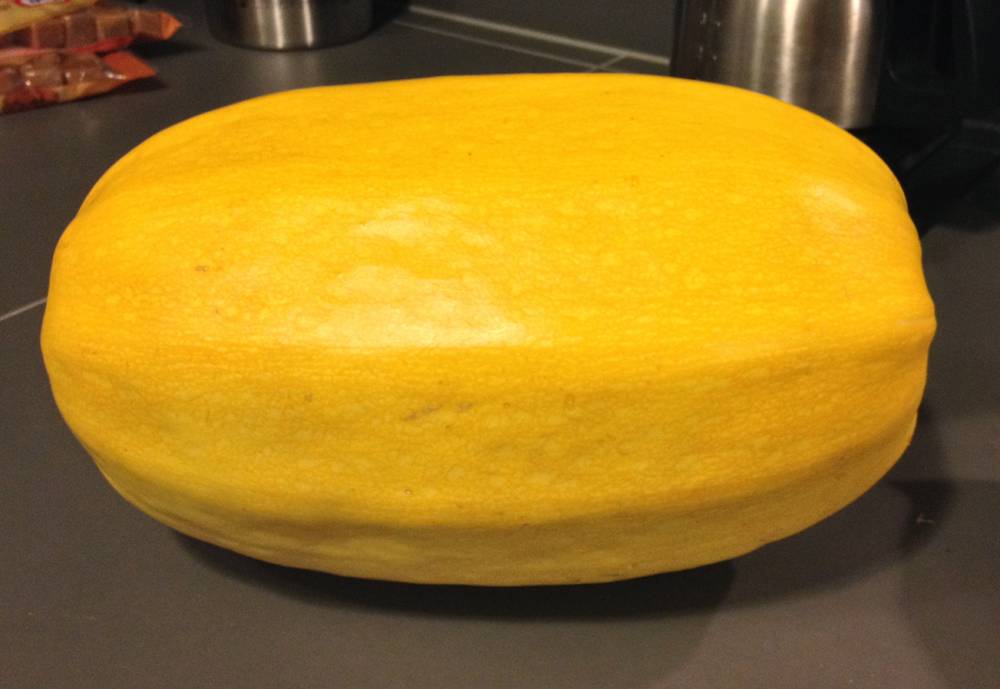 The next recipe I tried was a pin I saw on Pinterest.  I’ve been wanting to cook a faux pasta dish for awhile now, so when I saw this Gluten-Free Cheesy Veggie “Pasta” Bake, I knew I had to try it!

While grocery shopping, we were trying to figure out other ways to use up our apples.  So when I saw this gorgeous spaghetti squash at Trader Joes, I immediately thought of the “pasta” bake.  I mean, apples and spaghetti squash are both typical fall flavors, so adding apples to the recipe seemed logical.

If you’re not familiar with the spaghetti squash phenomenon, it’s a great alternative to pasta if you are gluten intolerant, trying to cut back on carbs, or just want to try something different. 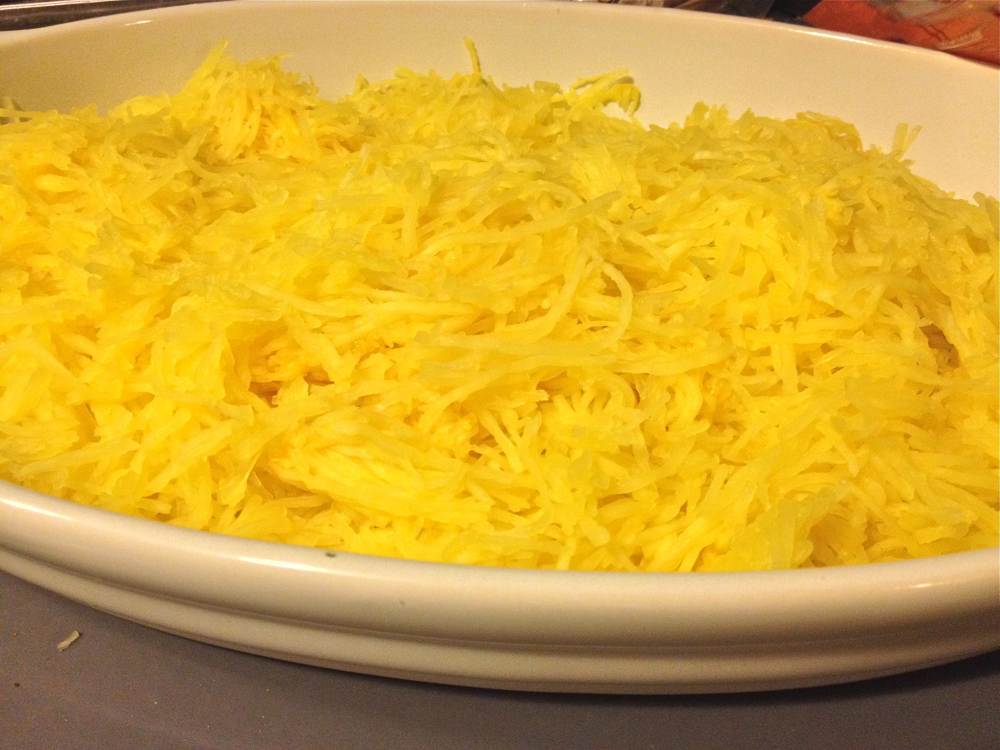 After cooking the squash (fastest and easiest method would be microwaving) and removing the seeds, you use a fork to scrape the flesh out.  You eventually end up with a big pile of spaghetti-like strands like this picture.

We followed the recipe pretty exact, but we replaced the zucchini with about 4 cups of chopped apple.  We also cooked the dish about 15-20 minutes longer than the recipe indicated, as the spaghetti squash wasn’t as soft as we wanted.

Here is the finished “pasta” bake! 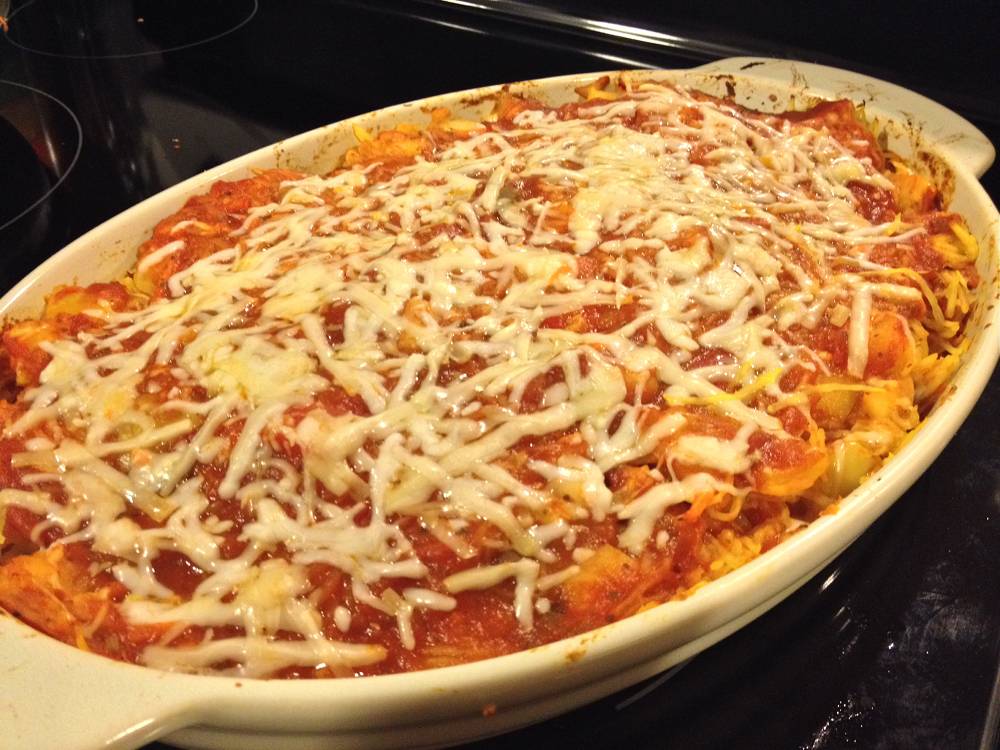 So tasty and a very healthy meal! 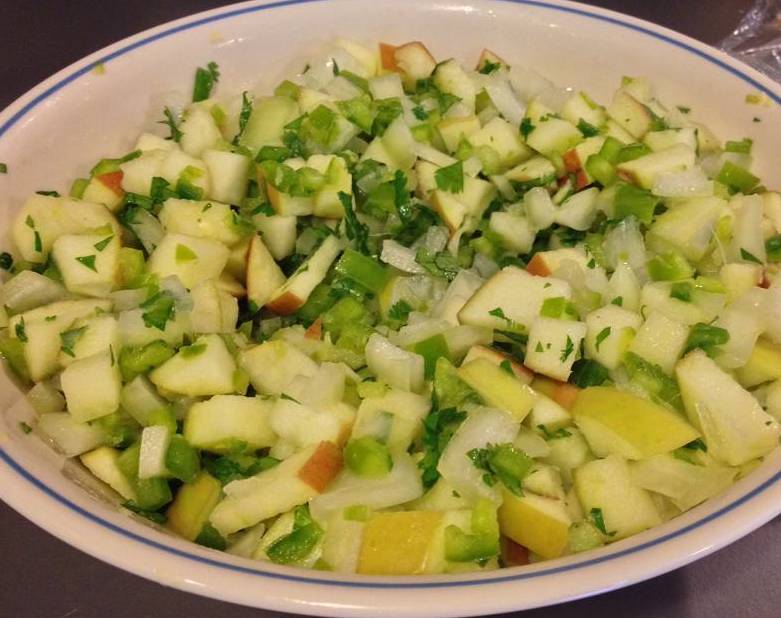 Now, I think we’d be pretty crazy if we had all these apples and we didn’t make caramel apples!  So we invited a couple of friends over for a caramel apple making/board game party.  We made this Apple Salsa for a snack!

A very unique salsa compared to a typical tomato based salsa.  We followed the recipe exactly, and it turned out really nice.  Fresh, tart, and sweet!  There wasn’t a whole lot of spice, despite the two peppers, but you could always skip deseeding them if you want more heat.

And now for the caramel apples!  We melted the caramel according to the directions on the package, we also melted some white chocolate for double dipping.  As you can see, we had quite the topping spread.  Our toppings included:  toffee bits, Nerds, cinnamon chips, crushed Butterfinger, peanut butter chips, and chopped pecans.

Here are a few pictures of some finished apples! 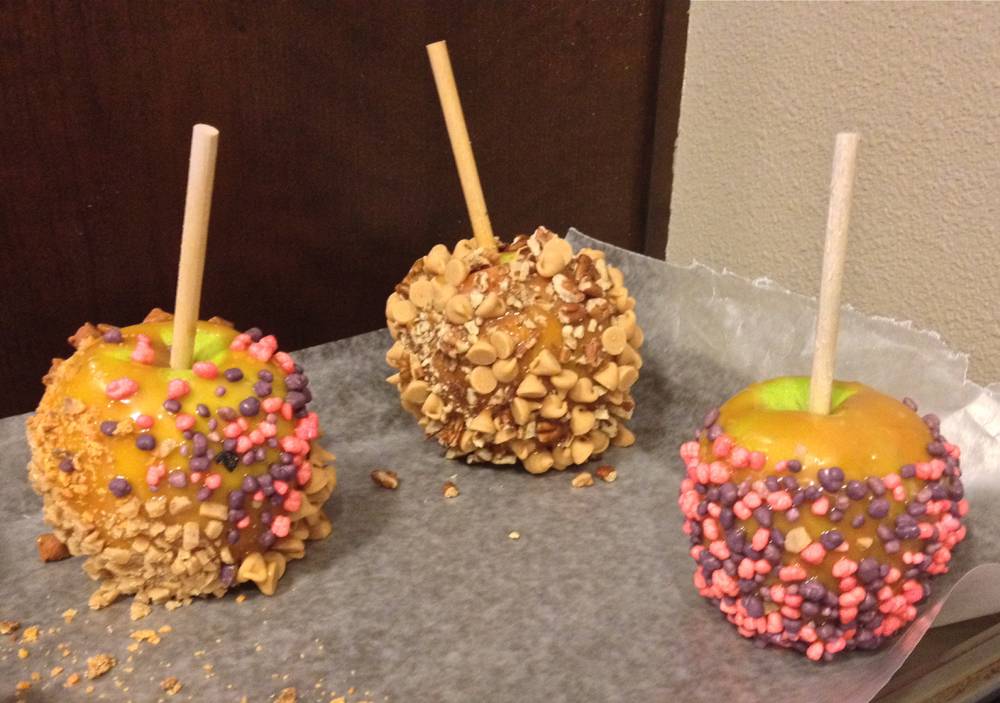 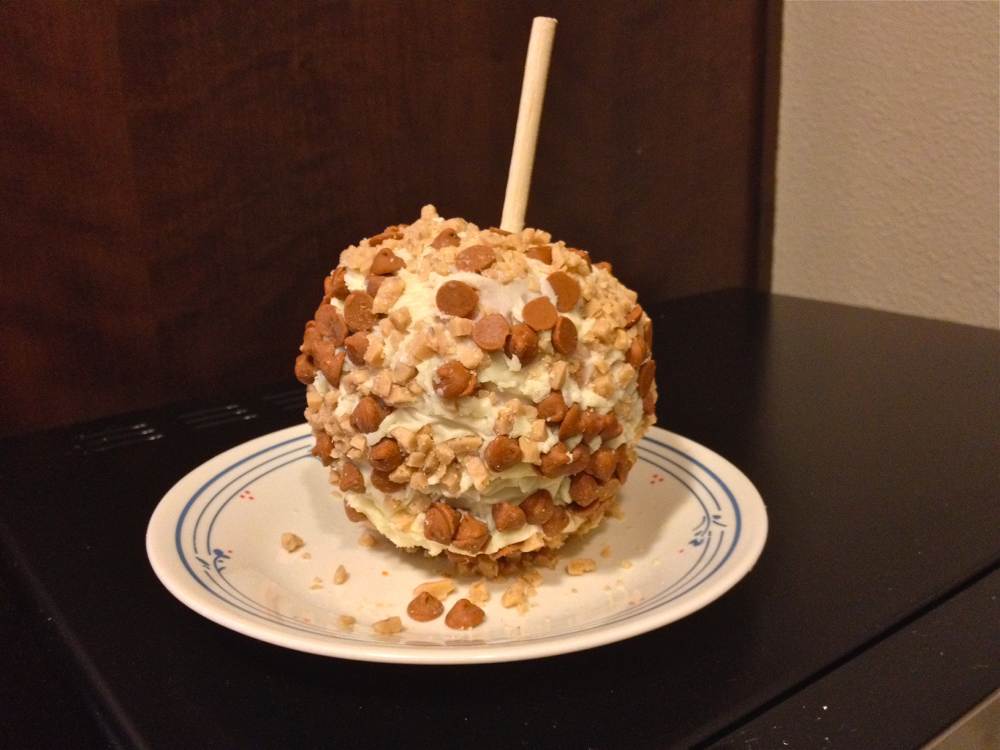 The apples Daniel and I made were:  Nerd covered, half Butterfinger covered, peanut butter chip and pecan covered, and the one pictured above…  Double dipped in white chocolate, and covered in cinnamon chips and toffee bits (which was by far the best apple).  This was the first time we made caramel apples, and they turned out pretty good for being novices!  The only trouble we had was the caramel and toppings sinking to the bottom.  If any of you have any tips to prevent that from happening, let me know!

And finally, the very last recipe… Apple Brownies!  Now, I will warn you, these are not technically brownies and do not have the texture of a brownie.  I’d say it’s more of an apple cake, and we knew this from reading the reviews beforehand.  Most reviewers said it was delicious despite the misleading name, so we still wanted to try it out! 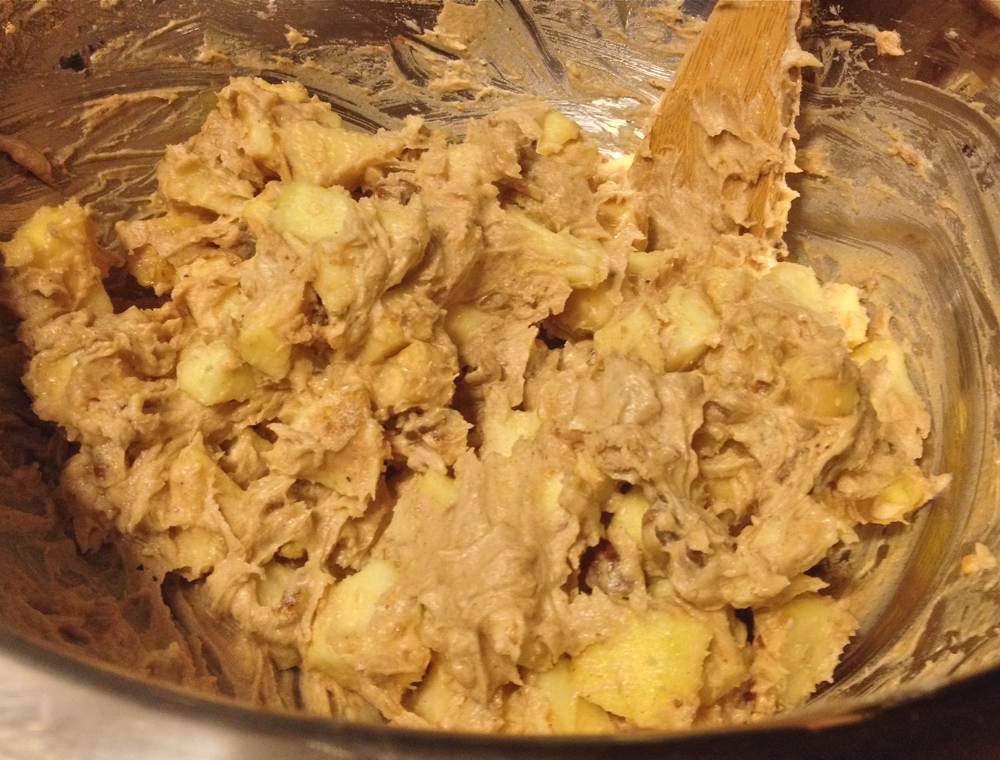 We did change a few things after reading several reviews.  We added 1 tbsp of vanilla extract to the wet ingredients, and 1/2 tsp of nutmeg to the dry ingredients.  We creamed the butter with the sugar instead of melting it first.  We also diced the apples instead of slicing, and sprinkled the top generously with cinnamon sugar.

Not sure if you can tell by this picture, but after you’ve combined the ingredients the batter will be very thick.  It will look like only apples and barely any batter.  Totally fine!  The apples cook down and the batter surrounds them perfectly!

They came out incredibly moist and with a nice crust on the top.  Unfortunately, they’ve gotten a bit mushier with storage, but still very tasty.  Again, it’s more of a cake, so I’d say the best way to serve this would be warm and with a scoop of ice cream!  We started heating bars in the toaster oven to crisp them back up! 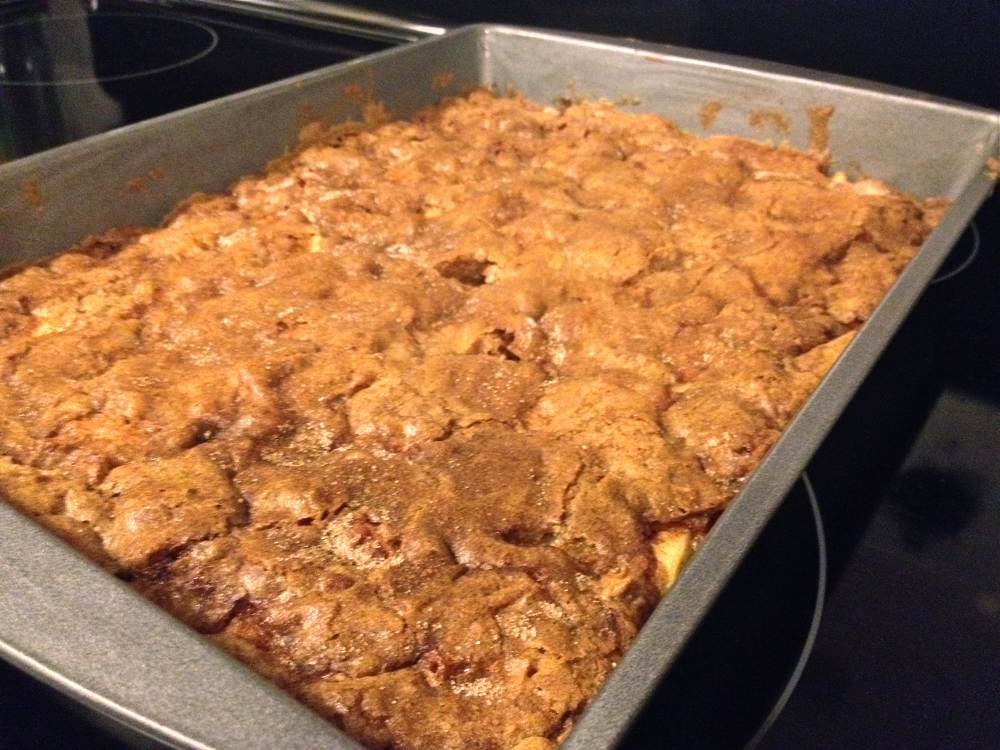 Whew!  I can’t believe how many recipes we tried in such a short timespan, and I seriously can’t believe how many apples we’ve eaten!  All in all, it was a fun experience.  It gave us the opportunity to try out new recipes, create our own, and cook with ingredients we don’t normally use.  So I hope you all enjoyed both part 1 and part 2 of our apple recipe adventure, found some new favorite recipes, and inspiration for your own everyday cooking!  Happy Eating! 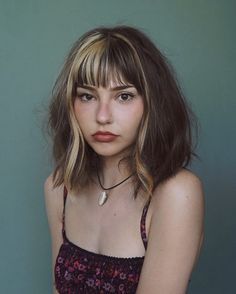 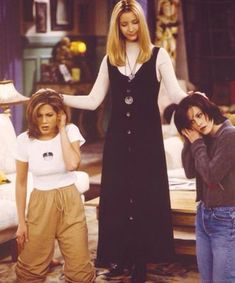 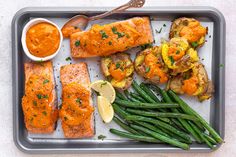 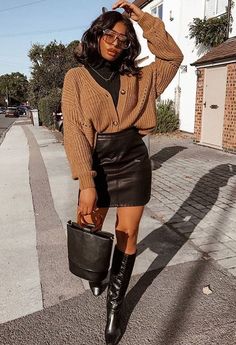 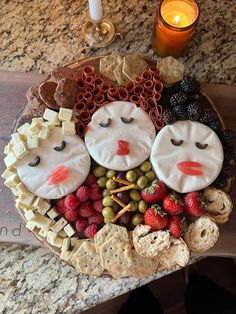 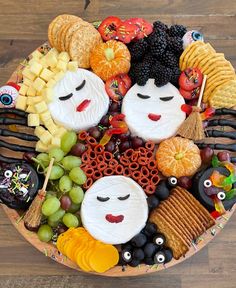